Health benefits of kiwi include skin care, improved cardiovascular health, lower blood pressure, and prevention of strokes. It also aids in the treatment of cancer, insomnia, macular degeneration, and diabetes. Due to the flavonoid-rich compounds found in kiwi, it also helps during pregnancy and promotes the absorption of iron in the body. Besides, the anti-microbial properties of kiwi guard against a range of pathogens and strengthen the immune system.

Kiwifruit is a delicious berry of a woody, twining vine and is popularly known by its shortened version as ‘kiwi’. It is native to China and is referred to as the country’s national fruit. Originally known as ‘Yang Tao’, kiwi is an oval-shaped, dull brown colored fruit with a fuzzy texture. The inside pulp is a vivid, semi-translucent, bright green flesh with a radiant pattern of lighter-colored spikes, freckled with a few tiny, edible black seeds. Kiwifruit has a unique and invigorating flavor with a soft and creamy texture. The Actinidia genus which includes kiwi comprises about 60 species. Globally, the most commonly consumed varieties are the ‘fuzzy’ and ‘golden’.

Kiwi was brought from China to New Zealand during the early 20th century by the missionaries. With the growing appreciation of this exotic fruit, people from New Zealand renamed it as Chinese gooseberries. Later, it was imported to the United States where it became quite popular. After going through multiple names, the fruit was finally named as ‘kiwi’ in the honor of the national bird of New Zealand for its small, fuzzy, brown appearance resembling the fur coat of the flightless brown kiwi bird. Italy, New Zealand, France, Japan, Chile, and the United States are the major contributors to the commercial production of this fruit.

The small kiwi fruit stores a treasure of nutritional surprises. It is an excellent source of vitamin C (ascorbic acid). Other vitamins including vitamin A, folate, vitamin E (alpha-tocopherol), and vitamin K (phylloquinone) are also present in good amounts. The mineral wealth of kiwi includes a tremendous quantity of potassium along with other minerals such as calcium, magnesium, and phosphorous. All these vital nutrients in the fruit come with an added bonus of dietary fiber. 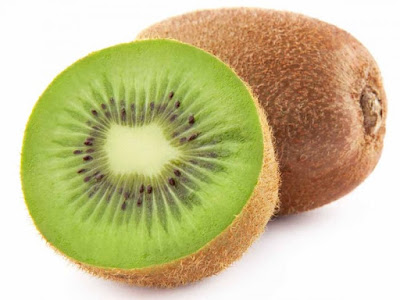 The growing global popularity of the kiwifruit attributes to an amazing blend of its unique appearance, flavor, and nutritional assets. Benefits of the fruit for medical conditions have been discussed as under:

Kiwi offers an impressive amount of vitamin C, phenolic components, and carotenoids which promote good health. A comparative study involving kiwi, oranges, and grapefruit revealed that kiwi fruit contains stronger antioxidant qualities as compared to the latter. Attributing to the presence of nourishing phytochemicals, it has an ability to protect the DNA present in the body cells from oxidative damage caused by free radicals, thereby reducing the risk of inflammations and diseases.

As mentioned, kiwifruit is rich in protective polyphenols along with vitamin C, vitamin E, and potassium which are effective in the maintenance of cardiovascular health. An investigative study revealed that this fruit exerts inhibitory activities which aid in the reduction of triglycerides in the blood. According to the study, consumption of a couple of kiwis on a daily basis helps in reducing the platelet aggression response or the risk of blood clotting. This fibrinolytic effect of the fruit on your blood vessels prevents the risk of thromboembolic and cardiac disorders like atherosclerosis.

It is a source of serotonin which helps promote better sleep. An investigative study conducted in this regard has shown that consumption of kiwi helps in improving sleep quality. It may also help in improving the sleep onset and in reducing waking time after the onset, hence providing relief from any sleep disturbances. This fruit contains flavonoids such as naringenin, quercetin, rutin, catechin, and epicatechin, which modulate the sleep-inducing receptors and are considered an effectual plant-based sedative agent. Attributing to this, the peel of kiwi is a potent ingredient for the development of natural sleeping aids.

An amazing benefit of kiwi is its ability to facilitate the absorption of iron in the body. A richness of vitamin C and other phytochemicals such as lutein and zeaxanthin in the fruit help in improving iron status in the body and prevents iron deficiency disorders. A comparative study performed between kiwi and banana has revealed that consumption of kiwi along with an iron-rich breakfast cereal results in significant increase in iron in the body as compared to banana.

Kiwi is a fruit for the eye and it contributes beneficially towards eye care. As already stated, it is a source of phytochemicals lutein and zeaxanthin which are critical components residing in the human eye. These helpful components along with vitamin A protect the eyes from cataracts, age-related macular degeneration, and other vision-destroying disorders.

Kiwi proves valuable for maintaining a healthy digestive system. It is a delicious source of fiber which promotes digestion and maintains intestinal health. It helps in providing relief from constipation by stimulating the bowel system. The natural laxative properties of this fruit owing to its fiber content add bulk to the stool and make it soft. A study conducted on kiwi revealed that is rich in proteolytic enzyme actinidin, which improves the digestion of proteins and facilitates smooth traffic through the digestive system. Polysaccharides present in the fruit help in averting the adhesion of enteropathogens and stimulating the probiotic bacteria in the colon. Kiwi extracts promote the growth of lactic acid, inhibit the development of Escherichia Coli bacteria, and aid in sustaining digestive health.

ALSO READ:  Must Read; 6 Health Benefits of Watermelons You Should Know

Kiwi is a perfect fruit for a pregnant woman attributing to the abundance of natural folate. Folate helps to prevent the occurrence of neural tube defects in unborn babies and is essential for their brain and cognitive growth. Other vital nutrients such as vitamin C, E, and K along with flavonoids present in the fruit also contribute beneficially to the overall health and development of the fetus and the expectant mother.

Kiwifruit helps maintain healthy and smooth skin due to its significant contribution in the process of collagen synthesis. It contains vitamin C, which helps keep the skin firm and expedite healing of cuts and abrasions. Vitamin E in kiwi assists in reducing the fine lines and appearance of wrinkles. It also helps in reducing the harmful effects of ultraviolet radiation on the skin, while the antioxidants present in this fruit work as a perfect anti-aging agent and prevent the skin from early degeneration, and keep it rejuvenated.

Kiwifruit has been traditionally trusted in the Chinese folk medicine for its effectiveness in healing various types of cancers such as liver cancer, breast cancer, stomach cancer, and lung cancer. Extracts of the kiwifruit inhibit the proliferation of cancerous cells and protect endogenous DNA damage. The fruit works against cancer by being cytotoxic to malignant cancer cells without affecting the normal, healthy cells. The antioxidants, carotenoids, vitamins, and fiber contribute beneficially to the effectiveness of kiwi in the prevention or healing of cancers. Catechin, a phytochemical present in kiwi helps in reducing the toxicity of anti-cancer agents by stimulating the bone marrow proliferation.

Kiwi contributes favorably to the regulation of the innate and adaptive immune system which is very critical for the healthy functioning of the body. Consumption of kiwifruit helps in fighting seasonal infections and other ailments attributing to its anti-microbial and anti-fungal action. Extracts from kiwi have shown to exert bacteriostatic action against various pathogens including Staphylococcus aureus and Staphylococcus pyogenes. Kiwi fruit helps in reducing the symptoms of cold and flu and other upper respiratory tract infections. It also exerts anti-inflammatory effects and exhibits the activity of pro-inflammatory cytokines.

Kiwi has a low glycemic index (GI) which makes it suitable for individuals with diabetes. A study conducted on kiwi extracts demonstrated that consumption of this fruit helps in regulation of adipogenesis which is critical for the prevention of diabetes. Dysfunction of adipose tissues in the body is strongly implicated in the development of insulin resistance and diabetes.

Owing to its characteristic looks and refreshing taste, kiwifruit can bring an amazing tropical style to your fruit salad dish. Nutrient-dense kiwi can be used as a functional ingredient to prepare bakery products with an enhanced health factor. It contains a tenderizing enzyme papain which is useful in breaking down the fibrous tissues of tough meats. However, for this same reason, kiwi does not go well with gelatin-based products. Papain enzyme is also known to have a curdling effect on milk. In case, you intend to use kiwi in any dairy or gelatin based products, cook it for a while to neutralize the enzymes.

How to Select and Store Kiwi?

Pick up kiwis which are soft and firm and avoid those with bruises or damp spots. Ripe kiwi would yield to a gentle pressure. The fruit that does not yield to a slight pressure indicates its rawness and signifies that it is yet not ready for consumption. They can be ripened by keeping at room temperature away from heat or sunlight for a couple of days or by placing them with an apple or banana in a paper bag to speed up the ripening. Ripe kiwi can be stored in the refrigerator for a few weeks.

Side Effects of Kiwi

Although abundant with its health benefits, kiwifruit can pose some side effects like allergies and kidney stones in certain individuals.
Allergic Reactions: The allergic reactions may vary from mild, localized oral allergy to fatal conditions such as anaphylaxis which may lead to death depending upon the sensitivity. Several studies have validated the presence of significant allergens in the kiwifruit which can cause severe reactions predominantly in young children.
Oxalates: Kiwi is a source of oxalate raphide crystals. Excessive consumption of oxalate-rich foods like kiwi can pose a threat to the development of calcium oxalate kidney stones in some individuals. Excess-intake of oxalates may also interfere with the absorption of certain nutrients including calcium and magnesium in the body.

Kiwi is a delicious and nutrient-packed fruit, which not only satisfies the taste buds but also encourages good health. It contains kissper, a cysteine-rich peptide, which may prove valuable in the treatment of cystic fibrosis. Kiwi is used in the preparation of anti-microbial products to reduce the development of resistance towards the conventional medications for fungal and bacterial infectivity. The fruit has natural blood thinning qualities without any side effects like aspirin. Attributing to its anti-inflammatory properties, it is also valuable in treating rheumatoid arthritis. Include this fruit in your diet to bring a nutritionally dramatic flair to your health.

5 Amazing Palm Oil Benefits For Everyone

Must Read; 6 Health Benefits of Watermelons You Should Know