Airsein
Home Diseases Important Ttips You Need To Know About Asthma
Share
Facebook
Twitter
Pinterest
WhatsApp
ReddIt
Telegram
Asthma is a common long term inflammatory disease of the airways of the lungs. It is characterized by variable and recurring symptoms, reversible airflow obstruction, and bronchospasm. Symptoms include episodes of wheezing, coughing, chest tightness, and shortness of breath.
These episodes may occur a few times a day or a few times per week. Depending on the person they may become worse at night or with exercise.
Asthma is thought to be caused by a combination of genetic and environmental factors. Environmental factors include exposure to air pollution and allergens.Other potential triggers include medications such as aspirin and beta blockers.Diagnosis is usually based on the pattern of symptoms, response to therapy over time, and spirometry.
Asthma is classified according to the frequency of symptoms, forced expiratory volume in one second (FEV1), and peak expiratory flow rate.It may also be classified as atopic or non-atopic where atopy refers to a predisposition toward developing a type 1 hypersensitivity reaction.
Asthma is a chronic disease involving the airways in the lungs. These airways, or bronchial tubes, allow air to come in and out of the lungs.
If you have asthma your airways are always inflamed. They become even more swollen and the muscles around the airways can tighten when something triggers your symptoms. This makes it difficult for air to move in and out of the lungs, causing symptoms such as coughing, wheezing, shortness of breath and/or chest tightness. 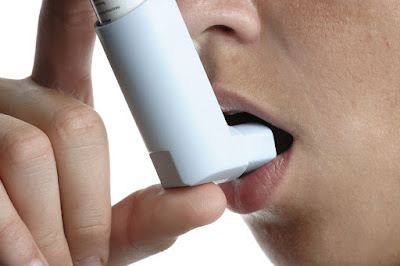 1.It is a costly disease: Asthma is a disease that requires regular doctor’s visits and tests. The inhaler used by the patients is indispensable and it needs to be filled regularly. Medicines are also used regularly to help control the symptoms of the disease and stop it from affecting normal daily life. Asthma attacks can occur at any time and this is why is absolutely necessary to have the inhaler at hand.

ALSO READ:  Must Read; 6 Health Benefits of Watermelons You Should Know

2.It has no cure: It is not a disease that can be treated permanently by taking drugs and medicines. Asthma is managed with the regular use of preventive and reliever inhalers which contain medicines in them. The attacks may occur randomly or as a result of exposure to risk factors during which reliever inhalers can be used to help normalize the affected airways. Preventive inhalers control the swelling of the airways and stop them from being so sensitive.

3.It is more common in children: Asthma is more prevalent in children than in adults and this is why parents should be more careful and attentive to any symptoms shown in their children. The reason for this is still being researched as some scientists have argued that children today are being raised in a more sterile environment and it allows their immune system to become easily compromised due to environmental factors.

4.It does not affect daily life: Although the disease has no cure and the attack can happen anytime, it does not need to affect normal daily activity. The attacks can be controlled by avoiding trigger factors, using the prescribed medicine and staying away from stressful and physically strenuous activities.

5.Children with eczema are at higher risk: doctors have found a link between eczema and asthma and have termed it the ‘allergic match’. Research has shown that there is a strong connection between a condition that affects the skin and one that affects the airways. So, if your child has been evaluated with skin tests, the child has to be properly treated with allergy shots to lessen his of developing asthma later on.

ALSO READ:  40% COVID-19 Cases Asymptomatic, Vaccines Ready For Human Trials
6.Perspective:  When you have your breath taken away and then get it back, you never take breathing for granted again.  At the same time you develop a view of life unique from people that have never had a health issue.  You value every moment you are on this planet.  You appreciate all the little things that others may take for granted, and that you may have taken for granted before you were diagnosed with asthma.  In a sense, you have developed a new feeling of vulnerability that leads you to taking extra time to smell the roses.

7. Vulnerability:  Anytime a person gets sick and has to spend time in a hospital he or she develops a sense that you are not invincible. You might not think of this as something good, but it is once you realize most people — especially young people — have no sense of vulnerability, they think they will live forever regardless of their actions.
This sense alone is the one reason, I think, that leads one to wanting to live a healthier life (a gallant asthmatic anyone?) and forming a closer bond with God perhaps.

8.  Religiosity:  Of course this doesn’t always happen, but when a person is left breathless (helpless) for any amount of time a call to a greater power often occurs.  Particularly when one’s prayer is answered one participates in a form of retrospection that leads one to appreciate that life is not always in our own control. This tends to lead us to a greater sense of empathy.

9.  Empathy: There is some truth to the statement that “Nobody has empathy for an asthmatic unless they have had an asthma attack or lived with someone who suffered with it.”  Well, since you have it and you have suffered once or twice with breathing trouble, you will forever have an understanding of any person who can’t catch his or her breath.  In a sense, you have doubled your asthma wisdom.

10.  Intelligence:  You were unable to spend time camping with your friends or family, or you were unable to visit yoru brother Bart because he has 21 cats and 17 dogs, and therefore were forced to stay inside your home and entertain yourself.  You didn’t pity yourself.  You didn’t say, “Why me?”  Instead you entertained yourself by thinking, rationalizing, philosophising and, yes, reading.
First you become an asthma expert by reading about your illness (in the process of becoming a gallant asthmatic one would hope), then you morph into other areas of interest, like politics, history and sports.

Years later your best friend may jokingly note that you are the smartest of all his friends (and it will be true all because you had asthma). And you will have this desire to share your new wisdom too.

11.  Sharing:  Many people who feel vulnerable (see above), who have lived through a life threatening moment of which an asthma attack is, have this enduring desire to share their experience with others.  They will also have a desire to share the wisdom they have learned as a result.

12.  Cleanliness:  You’ve learned what can cause an asthma attack, and now you have a desire to prevent that from happening again, so you take that extra step to keep your house clean from asthma irritents.

Asthma Management and Tips for a Healthier Life

Must Read; 6 Health Benefits of Watermelons You Should Know